London Removal › Blog › Moving house? Let this guide you to a smooth unpacking

You have now arrived to your new home and you are almost buried in boxes. The movers have left you with the unpacking. At this stage you will thank yourself that you marked all the boxes carefully so that you get a hunch of what they contain and that they are in the right room. Maybe you have even marked them with numbers so that you know that the box with number 1 written on it is the box that you should unpack first.

I would suggest you to have a structure when starting to unpack because the last thing we need is for all the boxes to stand in the way all half unpacked. No, what we need is some easy steps to guide you through this trying time. First of all, we need to unpack that box that contains all the necessities such as phones, chargers, toothbrushes, food, towels and such so that you are able to function even if your whole life is in boxes. Once that box is emptied, get it out of the way! We want to see the result, right. And also the more fragile things like paintings, mirrors and such should be stuffed away until you are settled. And before even thinking of starting to unload these boxes you should have a clear idea of how you have planned the rooms, planning the rooms while unpacking is not a good idea. Have everything figured out in advance, unpacking should come in last. And do not expect this so go by quick, I would say it will take you at least two weeks before you are done.

So, first things first, it is best for you to deal with the heavy stuff first while you still got the energy. Furniture should be placed in the right spots (better arrangements can be made later on) before you do anything else, and while this is begin done, you should have the beds made. You do not want to work until late evening and have no beds to crawl in to. Soon it is time for unpacking.

Keep your kids occupied by letting them take their boxes to their rooms to unpack. Also, these days you will not have time to cook. Prepare easy made meals or already finished meals for this time; believe me you will not have the energy to cook. And do not panic if everything isn’t unpacked for your first dinner, grab a blanket that you used to cover the sofa and have a picnic in the family room. Make it a good experience.

Now it’s time to unload the boxes. So let’s say you start by unpacking the kitchen, make sure you take it step by step, the most necessary is to be reloaded first like forks and knifes, bowls and plates, microwave and coffee machines. Glasses, plates and cups will be wrapped into papers so an idea is to wash them after unpacking them and still remember, after each box emptied, get it out of the way. When moving on to the bathroom, the most important thing is for you to control if the mechanical system are in function. This is probably a rather small room so it will be easy to unpack and give you a mood boost to keep on with the other rooms like living – or bed rooms.

Take your time with this; you don’t have to unpack everything on your first day. Just take it easy, stay organized and calm. You have arrived to your new home, enjoy! 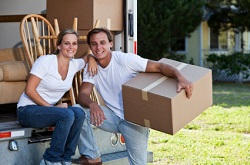 The whole world seems to be on the move these days with people of all nationalities deciding to pack up and relocate...

Moving is a difficult enough task. It makes it even more stressful when there are items in the house that are so...